Hardback. Cover in nice shape. Blue with gold and black inlay is in very good condition.
158 pages with numerous illustrations. Minor wear to corners, and slight wear top and bottom of spine. This is a used book in good condition, pages are slightly discoloring, print in fine shape. Very solid with strong binding. (See photo of actual book)
Copyright 1910.
Author – Garrett P. Serviss
Not a first edition (1888) but the 1910 edition is not mentioned in the World Catalog.

This is a classic beginners guide to the stars, moon and naked eye planets with the most simple and inexpensive form of optical aide – the opera glass or field glass.

The author of this popular treatise has endeavored to encourage the study of the heavenly bodies by pointing out some of the interesting and marvelous phenomena of the universe are visible with little or no assistance from optical instruments and presents means of becoming acquainted with the constellations and planets. Many wondrous evenings of starry eye fulfillment are possible with the information contained within the writings and knowing where to look in the night sky.

The book begins with seasonal constellations and tells the budding star gazer how to identify the constellations with a number of star maps generously included. A number of popular double stars to look for and “test stars” to measure the quality of your opera-glasses appear in the publication. Some of the brighter Messier objects are referenced, and presented with facts as they were known well over one hundred years ago.  The author includes legends and stories from ancient mythology in his descriptions too.

Overall a charming and easy to read book that has been in print for a very long time. Your great grandfather or great grandmother may have learned the sky from this book!

“The greater part of the matter composing this volume appeared originally in a series of articles contributed by the author to “The Popular Science Monthly” in 1887 and 1888. The reception that those articles met encouraged him (the author)  to revise and enlarge them for publication in the more permanent form of a book.”  — Garrrett P. Serviss –

Chapter 4   The Stars of Winter  – 89
Description of the Constellations
Argo
Canis Major
Eridanus
Lepus
Monoceros
Orion (the Great Nebula)
Taurus
The Pleiades and Hyades
A circular index map, maps on a large scale, constellations described and
pictures of remarkable objects.

Chapter 5 The Moon, the Planets and the Sun – 118
Description of lunar “seas”, mountains and craters, with a map of the moon and cuts
showing its appearance with field glasses.
Opera-glass observation of – The sun (one cut), Mercury, Venus, Mars,
Jupiter and his satellites (one cut), Saturn, Uranus (three cuts) 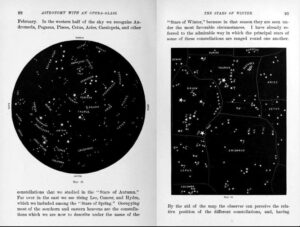 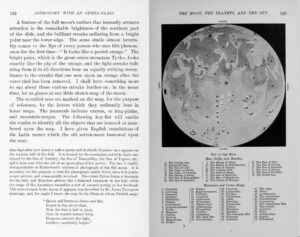 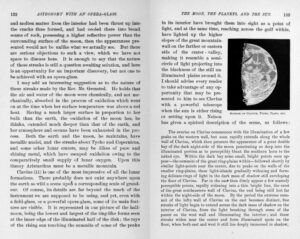 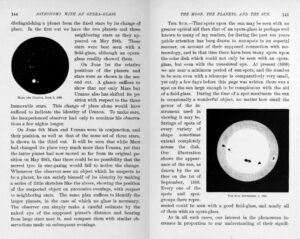 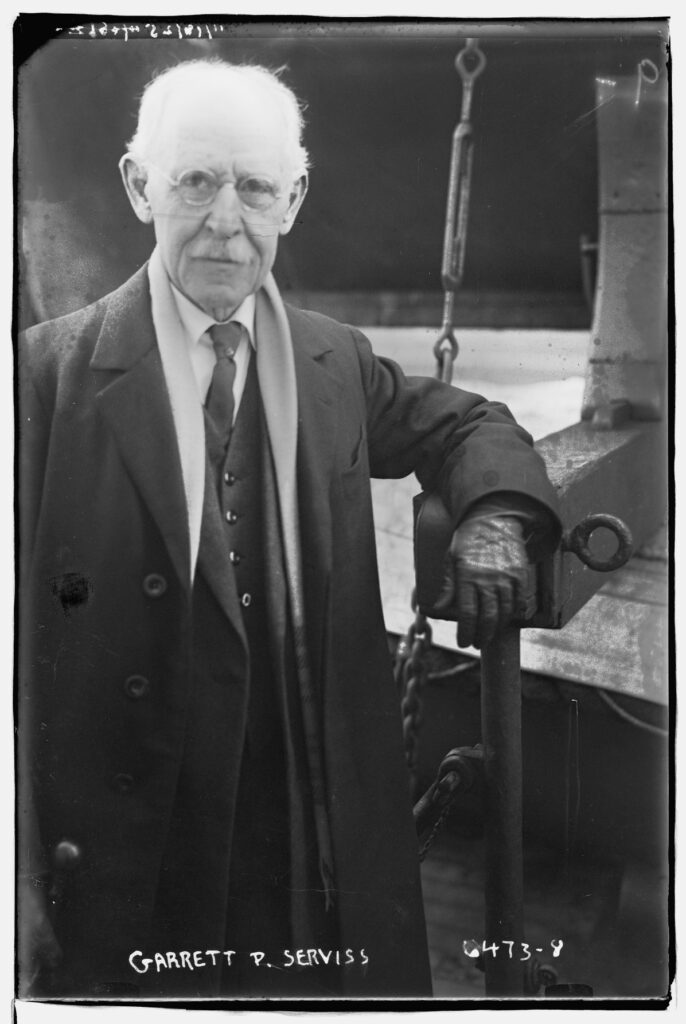